What Does Consent Mean?

Consent is an important part of any sexual assault claim. The laws regarding consent vary from state to state and by circumstance. Many people do not fully understand the definition of consent or what it could mean for a case. Learning about the related laws in California could help you determine whether you have a sexual assault claim. It could also help you prepare a response if the defendant tries to use consent as a defense. 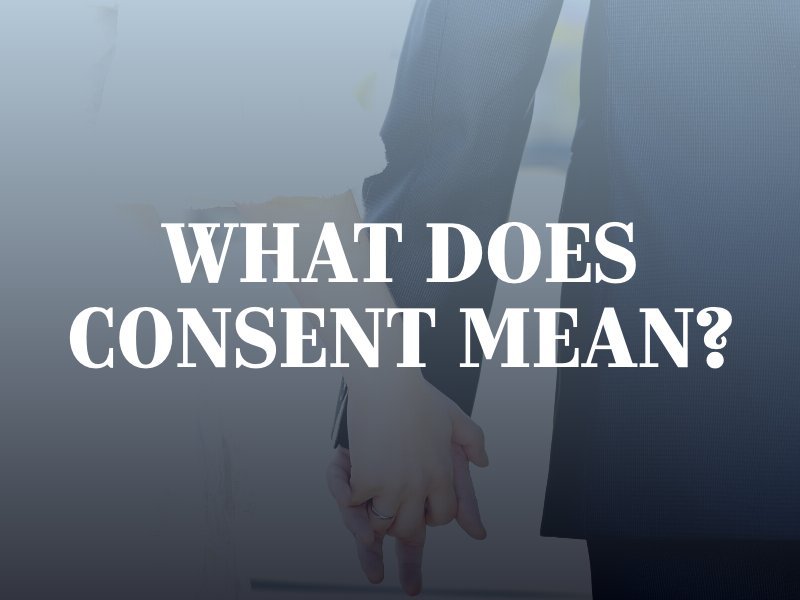 California Penal Code 261.6 gives the state’s definition of consent as part of a statute about crimes against people involving sexual assault. It defines consent as a person’s positive cooperation in act or attitude in accordance with an act of free will. The person giving his or her consent must act freely and voluntarily, as well as understand the nature of the transaction or act to which he or she is consenting. A dating, spousal or marital relationship is not sufficient enough to constitute consent during sexual assault cases.

California’s definition of consent is more specific than in many other states. While most states do not include language such as “freely given” or “alternative” consent, the statute in California does. It is one of only a handful of states with sexual assault laws that include this language. State law also places an age limit on consent: 18. A person has to be 18 or older to give his or her consent in California. Even if a minor under the age of 18 agrees to an act, he or she has not lawfully given consent due to age. The only exception is if the adult in question is the minor’s spouse.

Consent as a Defense to Sexual Assault Charges

Consent is a potential defense to sexual assault that a survivor should be ready to combat during a civil claim in California. Consent is a usable defense against rape charges, abduction for different sex crimes and rape of a spouse in the state of California, according to Penal Codes 261, 262, 265 and 266. It is not a usable defense, however, if the claimant is under 18 or had a relevant disability at the time of the alleged assault. In California, a person with a developmental disability or mental disorder cannot give his or her legal consent to sexual activities. A physical disability could also prevent someone from giving consent, under section 261.

The consent defense may be applicable if the survivor under 18 years old was in a relationship with the defendant at the time of the alleged assault. If the plaintiff’s actions meet the definition of consent in California and the plaintiff was in a spousal relationship with the adult in question, it may not be a usable answer to the consent defense to say the plaintiff was under 18. A minor is capable of giving his or her legal consent to sexual intercourse if the adult is the minor’s spouse under section 261.5 of the law. The minor’s words and actions, however, must meet California’s legal definition of consent.

Consent is when a person gives permission for something to happen or agrees to do something with someone else. In a sexual assault matter, consent refers to permission to engage or participate in sexual activity with another person. It is when someone actively agrees to be sexual and expresses that sex is wanted. Consent can take more than one form, although clear verbal consent is best. Examples include:

Silence is not consent, nor is consent given by someone’s past behavior or what they wear. It should be clearly and enthusiastically given. Even with encouraging body language, it is still necessary to seek verbal confirmation of consent. The best way to ensure that consent has been given is through open communication. Periodically check in with a sexual partner and establish boundaries and expectations ahead of time to help prevent sexual assault.

After someone gives consent, that person has the right to change his or her mind at any time. If the person is no longer comfortable with an activity and wishes to stop, consent can be withdrawn. In addition, a person giving his or her consent to one thing does not mean consent is automatically given for something else. Consent needs to be reaffirmed with every new situation and encounter.

A person who is incapacitated cannot legally give his or her consent. Incapacitation can refer to mental deficiencies, such as someone with a developmental disability, cognitive disorder or a vulnerable adult. It can also refer to someone who is intoxicated or impaired by drugs or alcohol, including prescription medications. Being asleep, sedated or unconscious are also forms of incapacitation. Regardless of whether the person is voluntarily or involuntarily incapacitated, he or she cannot give consent to any type of sexual activity in this helpless state.

The Legal Role of Consent

Consent is a complex concept that can change its meaning based on the context involved. When assessing the question of consent for a sexual assault claim, a judge or jury will analyze the circumstances to determine if the alleged victim did not give his or her consent. To make this determination, three questions are typically asked:

Capacity to give consent does not only refer to whether the individual was incapacitated. A person’s age and relationship to the perpetrator can also play a role in capacity to consent. If the power dynamic between the plaintiff and defendant was unequal, this can take away a victim’s ability to give consent, as well. Examples include the imbalanced relationship between a doctor and patient, a teacher and student, and an elderly person and caregiver.

Your Rights if You Did Not Give Consent

If you did not give your consent to a sexual act that was committed against you, you may have the right to bring both criminal and civil charges against the assailant. Engaging in any type of sexual touching or activity with someone who did not give consent or legally cannot give consent in California is the crime of sexual assault.

In California, you have 10 years from the date of the sexual assault or abuse incident to file a claim if you were assaulted as an adult. If you are a victim of child sexual assault or abuse, you have until age 40 to file a related lawsuit or five years from the date of discovery. However, acting quickly can benefit you, as there may be more evidence available to support your claim.

Proving a Sexual Assault Case and Lack of Consent

If you file a lawsuit against a person or entity for a sex crime committed against you in California, the burden of proof rests with you as the plaintiff. It is the plaintiff’s burden to establish that the defendant is responsible for the harm being claimed. The evidentiary standard that must be met in a civil lawsuit is a preponderance of the evidence, or clear evidence that convinces the courts that the defendant caused the plaintiff’s injuries or losses with at least a 51 percent certainty.

To prove that you did not give your consent to the sexual activity involved in your claim, you or your lawyer will need evidence. If there were no witnesses present at the time that the crime transpired, your case may have to rely on other types of evidence, such as an incident report filed with the police, medical records from your visit to a doctor after the sexual assault, a forensic sexual assault exam, medical records from a therapist or counselor, statements from friends and family whom you told about the assault, and entries from your personal journal or diary.

If you were under the legal age of consent, drugged or under the influence of alcohol, restrained by the perpetrator and unable to escape, in an unequal power dynamic with the perpetrator, or incapacitated, your lawyer can use this as evidence that you did not give your consent. A sexual assault attorney in California can help you preserve and collect any available evidence to support your claim.

Does Your Case Involve Consent?

It is possible to give consent verbally and nonverbally. Physical cues can communicate to the other person you are comfortable and ready for the next step. Giving your consent once, however, does not give consent to any future sexual activities. Consenting to one thing also does not give your consent to other acts. Being of the legal age to engage in sexual activities, being in a relationship with someone, being married, imbibing in drugs or alcohol, wearing certain clothes, flirting, or kissing a person is not the same as giving your consent.

If you are curious about how the consent defense could play a role in your sexual assault case, speak to a qualified California sexual abuse lawyer or Los Angeles sexual abuse attorney at Manly, Stewart & Finaldi for a confidential and in-depth consultation. Consent is a complicated matter that often requires legal attention.