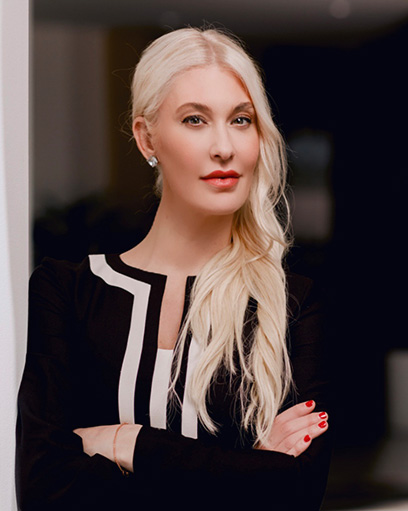 Sarah Klein is a widely respected attorney who exclusively represents survivors of sexual abuse. A former competitive gymnast, Klein is the first known victim of former Olympic women’s gymnastics doctor Larry Nassar. At the 2018 ESPY Awards, Klein accepted the Arthur Ashe Courage Award on behalf of herself and the hundreds of other survivors who spoke out and testified about Nassar’s abuse.

Soon thereafter, Katherine Schwarzenegger profiled Klein in her New York Times Bestseller “The Gift of Forgiveness.” Most recently, Klein appeared in the number #1 show on Netflix, Cheer (Season 2, Ep.5)  alongside her clients bringing the topic of sexual abuse to the forefront of the series. Klein is a fierce advocate for legal, cultural, and political change, actively spearheading the fight to extend the statute of limitations for abuse survivors across all 50 states. She regularly testifies in front of state legislative bodies and was among the small group of key and notable people invited to the Child Victims Act bill signing in New York State in February 2019.

Klein has become a leading voice on sexual abuse and other legal issues on television, radio, and in print media including ESPN, NBC, CBS, ABC, Fox, NPR, The New York Times, The Washington Post, and USA Today.  She is a recurring legal analyst on Court TV. Her most recent op-ed, The Kamila Valieva case shows yet again that the International Olympic Committee is betraying teen athlete was published by The Guardian during the 2022 Winter Games. Klein has also taken to the Ted Talk stage, receiving a standing ovation for her widely viewed talk “Being Victim 125.”


Klein has delivered hundreds of keynotes across the country and is grateful for the opportunity to share her experience and story in the hopes of a better and safer tomorrow. Her weekly podcast Bar Fights: Talking On Issues that Matter can be found on Apple Podcasts, Spotify, iHeartMEDIA, Audacy and Stitcher.