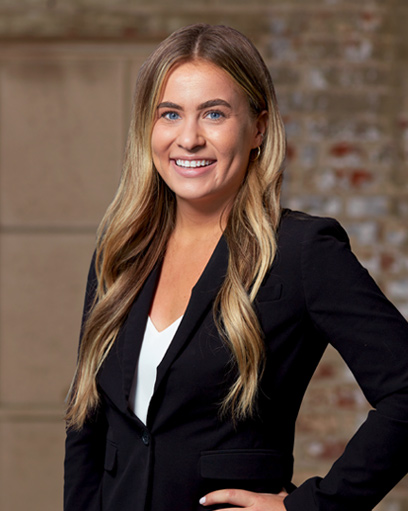 Courtney Pendry is an associate attorney with Manly, Stewart & Finaldi. Courtney is a Chicago native who attended Valparaiso University in Indiana, graduating with honors with a Bachelor of Science in Business Administration. Following college, Courtney went directly to Michigan State University College of Law where she worked with the MSU Chance at Child Childhood Legal Aid Clinic, both as a clinician and later as the student coordinator, earning her Child & Family Advocate Certificate.  Courtney’s experience with the Clinic also provided her with the opportunity to work in conjunction with the School of Social Work, assisting children and families involved in the child welfare and juvenile justice systems.

Before MSF, Courtney focused her practice on personal injury litigation, representing both businesses and individuals in matters involving insurance defense, subrogation, general liability, personal injury, and construction defects. However, after a year of practice, Courtney’s passion for advocating on behalf of sexual abuse survivors led her to join the legal team at Manly, Stewart & Finaldi.

Since joining Manly, Stewart & Finaldi, Courtney has worked exclusively in the personal injury division, representing survivors of sexual abuse, harassment, and molestation, against public entities, private entities, the Catholic Church, and more. Courtney also has experience representing sexual abuse survivors in some of the nation’s most significant multi-plaintiff sexual abuse cases, including those against Dr. Tyndall/USC and Dr. Heaps/UCLA.

COVID-19 Update: Although MSF’s physical offices may be temporarily closed, our business continues to operate remotely and our attorneys are available by phone & email to serve existing & new clients. The health of our attorneys & clients is our priority as we operate from this digital format. Learn more here.