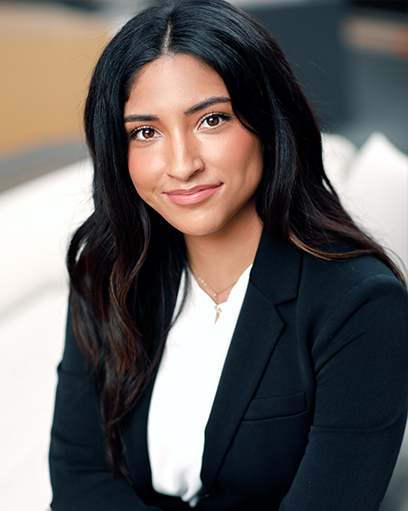 Ariel J. Romero is an associate attorney at Manly, Stewart & Finaldi. Since joining the firm Ariel has gained significant experience in representing victims and survivors of sexual abuse.

She was part of the litigation teams in high profile matters such as Jane Doe 5 v. Dr. George Tyndall and the University of Southern California and Jane Doe v. Dr. James Heaps and the Regents of the University of California. In Tyndall, MSF was Plaintiffs’ Liaison Counsel and obtained an $852 million global settlement, the largest sexual abuse settlement against a university in history. These complex, multi-plaintiff litigations provided Ariel with extensive knowledge in litigating physician sexual abuse. She is also part of the trial team at MSF in cases involving minor children abused by their teachers and coaches.

Ariel is passionate about her work in representing survivors and brings a unique perspective given she is a survivor of trauma. As a victim of mass gun violence, she understands and is compassionate about the struggles victims face daily—particularly minority victims.

Having worked on Tyndall and Heaps, where legislation was critical to success, Ariel intends to advocate for legislative changes to help survivors.

Ariel grew up in Los Angeles and graduated from Loyola Marymount University, receiving a Bachelor of Science in Business Administration with an emphasis in Business Law. As an undergraduate student, she clerked for the District Attorney’s office at Airport Courthouse in Los Angeles. Ariel continued her higher education at Chapman University’s Dale E. Fowler School of Law, where she was involved in the First-Generation Scholars Program both as a student and mentor, became Managing Editor of the Chapman Law Review and received The National Order of the Scribes Award upon graduation in 2021.